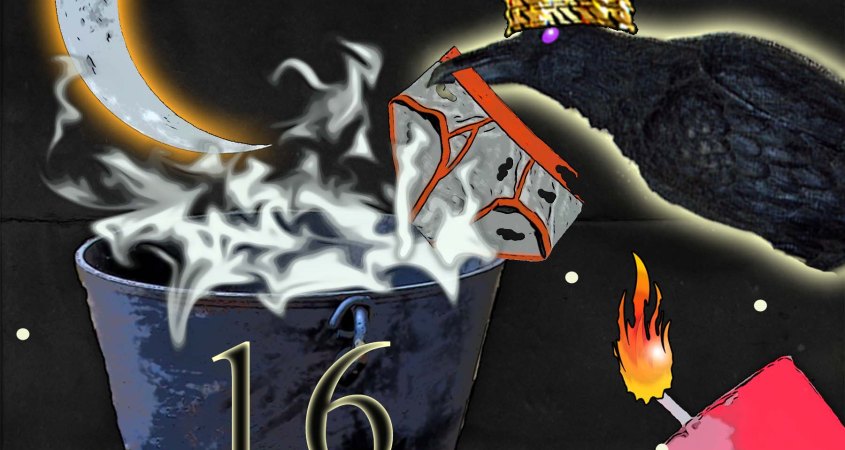 A Cauldron of Underwear

However….Tuesday is a Mars Day — So!  If you have been feeling sluggish, worn, or have been procrastinating:  Light a RED candle surrounded with cinnamon to pep up the brain!

Pick a positive thought.  Hold on to it.  SEND it to a loved one.  Retain the connection as long as you can.
Practice sending one positive thought to someone you love three times a day.

We are rolling on the downside of the program!  WHOOOOWEEEE!  Today is underwear day!  Yup, that’s right.  Underwear day!  People don’t often think about their clothes holding negativity.  Your clothing is a barrier that absorbs your feelings from the inside and negativity from the outside.  Different fabrics do react in variation; however, our focus today is about our underwear (regardless of the fabric type) — because it is the clothing that sits the closest to our root chakra.  Today, we go through all the old underwear and we throw out all the yuckie undies and replace them with new ones.  Except, this year, we have a bit of a twist — we’re going to use a Braucherei technique — so you will need a pot, an old pair of underwear, water, and some salt.  Now, as an aside, if you are the commando-type person, you will have to choose some other clothing, preferably something that can fit in the pot.

Today’s Challenge — In Braucherei (Pow-Wow) if you want to remove negativity attached to someone, you boil something that belongs to them — preferably, their underwear.  Now, if you want to catch a cheating partner — you put an assortment of herbs on the crotch of the underwear, and you burn them.  But, that’s not what we’re doing today (supposedly).  Today, we are removing negativity that has attached itself to us.  To do that, we’re going to spit on the underwear, command that all negativity attached to you is banished, and boil that old pair of underwear in salt water!  While yer drawers is boiling, you chant as long and as hard as you can to banish all negativity that has attached itself to your person.  When your mind wanders — you are done.  Allow the pot to cool and throw the hole mess out!  If you like, you can add essential oils to the pot — like lavender, OR you can add rosemary herb.

Where did this underwear technique come from?  How do we actually know that Pow-Wow’s did such a thing?  Interestingly enough, there’s a story in an old newspaper that talks about a man whose wife had left him and he wanted her back.  He visited a Pow-Wow who told him to bring a pair of the woman’s underwear to the Pow-Wow’s home.  He said to the man (and I’m paraphrasing here), “I boil the underwear and all evil will be banished.”  In the story, the man was disgruntled because his wife never came back; and, therefore, he said that the spell didn’t work.

What chant can be used?  Any banishing chant you like.  To keep things simple, you can use the Evil Be Gone Chant:

you can simply say:

Banish the evil no thread can come back
The pathway is broken, no way to attack.

The evil is broken, I boil it away
Good Health is restored with the light of this day.

(or Good Fortune, or Good Times, or Harmony — you choose).

The third chant is to be done at dawn, as the sun rises — the other two could be used at any time.

1.  Perform Your Morning Braucherei Ritual (1 star)
2.  Throw at or give at least ONE thing away. (2 stars)
3  Make a concerted effort to send one positive thought to someone you love as long as you can three times today. (1 star)
4.  Do today’s main challenge — Clean out your underwear drawer and boil a pair! (1 star)
5.  Do one 3-Minute Dash! (3 stars)
6.  Empower and burn your Activation candle. (1 star)
7.  Post how the program is going for you in the comment section (5 stars)
8.  Don’t forget to do your Evening Walk Through right before you go to bed! (1 star)

Total Number of Stars You Can Earn Today:  15

See ya in the morning!
Silver

Silver’s monthly newsletter is available in her Etsy store — CrowCrossroads